“THE DREAM OF A TRIBAL MUSEUM FOR THE CONFEDERATED TRIBES OF THE WARM SPRINGS RESERVATION OF OREGON BEGAN OVER FOUR DECADES AGO.” 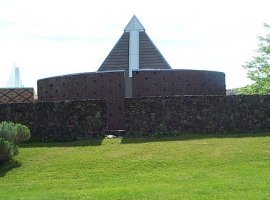 The Museum at Warm Springs is many things, not the least of which is a striking piece of architecture, a 25,000 square-foot structure that packs an emotional wallop all too seldom felt in contemporary public buildings. But most of all, perhaps, The Museum exists as an answer to a question that has troubled Native Americans in general, and The Confederated Tribes of Warm Springs in particular for most of the past century. Can this nation’s Indigenous peoples take any meaningful steps on their own initiative, under their own control to halt the erosion of their traditions, the dispersal of their sacred artifacts, the loss of their very identity as a culture?

Chief Delvis Heath of the Warm Springs Tribe is a quiet man with a deeply lined face. “Way back in the 1960s,” the Chief laments, “We could see that the old ways were disappearing, the old language was disappearing, and pretty soon none of our young people would know where they came from or who they were. That’s when we decided to build a museum.”

With strong support of the Tribal Council for The Museum Project, Resolution No. 4084 was passed in 1974 adopting the first Charter and establishing the first Board of the, then, Middle Oregon Indian Historical Society. The Charter has been amended several times, subsequently changing the name MOIHS to “The Museum at Warm Springs.” It took over 20 years of planning and numerous meetings to finally hire the first Executive Director in 1987. A tribal referendum was held in October 1988 voting in favor of appropriating $2.5 million for The Museum construction. Later, another $726,493 was added making $3,226,493 the largest sum ever committed by an Indian tribe for a museum. This was the first tribal museum in the state of Oregon.

After hiring the first Executive Director, it took only a few short months to raise another $3.1 million from grant foundations, corporations and individuals. Benefiting from these monies was the construction, education program and an endowment, bringing the total cost of the museum project to $7,628,900.

Construction began on May 7, 1991 by SM Andersen Construction Company, Inc. of Portland, Oregon. The building designer was Stastny & Burke Architecture, Inc., also of Portland. The exhibits were designed by Formations, Inc, also located in Portland. Grand Opening was celebrated on March 13, 1993! Truly, a dream come true!

From then on, The Museum has been under the leadership of the Board Of Directors, creating a Mission Statement and a Board of Regents.

The Museum at Warm Springs exists to preserve the culture, history and traditions of the three Tribes which comprise The Confederated Tribes of Warm Springs. The Museum was designed to provide a welcoming sight to the public as well as a safe conservatory for the traditional treasures of the Tribes.

As the architects began planning, they first set up a meeting place and invited tribal members to participate in the designing and integration of any tribal traditions. Elders of each Tribe were invited to meetings to give ideas and suggestions based on their historical perspective. 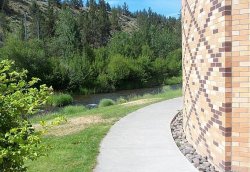 The exterior effects and building are arranged to resemble a traditional encampment among beautiful cottonwood trees. It is situated alongside Shi-tike Creek which empties into the Deschutes River in North Central Oregon.

Materials used in the construction reflect the surroundings and traditions of the Tribes. Local stone, timber and brick are finely tuned to demonstrate the integration of the arts into everyday life. Traditional designs and symbols are embellished into the building including a drum, dance bustle, tipi, longhouse, travois and patterns of a Klickitat huckleberry basket. 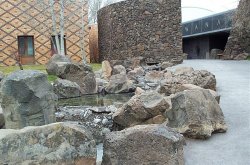 As visitors arrive, the experience begins by strolling up a sidewalk next to a live stream, into a circular stone drum and up to the exquisite door with handles shaped like a bustle.

After you enter the building, the stream continues, only into a gray polished slate floor, creating a stream-like appearance. The visitors then encounter huge columns of what was once tall native trees of the Reservation. This is the main lobby of The Museum and the entrance to the permanent exhibit hall.

The Museum contains the Permanent Exhibit, a changing exhibit gallery, an exquisite gift shop, public restrooms, a library/archive, education room with cooking facilities, a conference/board room, artifact collection space and an office, a maintenance room and an administrative area.

Just outside to the west, a small amphitheater is designed to be used for outdoor performances, demonstrations and other public events.

These galleries showcase a broad spectrum of tribal artifacts, but The Museum devotes as much to the cultural and historical record of The Confederated Tribes of Warm Springs Reservation as it does to their arts and crafts. “We wanted the museum to tell the story of our people,” explains Delbert Frank, Sr., President of The Museum’s Board of Directors in 1993 and an influential member of the Tribal Council. “We wanted it to tell the truth. To educate both the public and our own children. To tell them who we are.”

Closed on these holidays:
Thanksgiving, Christmas and New Year's Day